A slice of heaven in untrodden corners of Almora, Uttarakhand

On a cold chilly morning, my frozen hands and toes feeling uncomfortably numb, surrounded by nothing but the solemn silence of the resolute mountains, watching the lofty Himalayan peaks slowly turn pink at sunrise, I made a promise to myself that I will come back to these mountains as many times as I can. Because there’s no good reason in this world that justifies staying away from the joy of getting lost in the infinite beauty of the Himalayas!

In a forgotten valley between the famous hill stations of Almora and Kausani that have captured our imagination for long, I spent a week at Kosi Valley Retreat in the obscure yet picturesque Someshwar Valley where the River Kosi meandered quietly endowing the valley with all its might, impervious to all the attention the hills around were getting. The lower slopes of the mountains and the fertile plains between them were packed green with verdant terraced fields, amidst them children frolicked and women in colorful dresses worked. Hidden beyond the small mountains were the giants, Trishul, Nanda Devi, Nanda Ghunti, Chaukhamba and their ilk. Sparrows, magpies, bulbuls and many other birds flitted around in the branches of the pine trees but the river quietly flowed in between.

In this valley that is something like heaven, I spent my time day-dreaming under pine trees, cycling along winding roads, hiking in the hills, running after birds and talking to Himalayas. If there’s something like homecoming, this was it.

Having seen a lot of Himalayas before, I’m not one to be easily appeased by a quick peek of a peak above the ridges. I have hiked for days in its impenetrable valleys, crossed over several passes, camped in flower filled grasslands and have seen sun cast its first light on the big mountains from right under their noses. But here – in Almora – I am certain that I have never been this spell bound before. When I saw the mighty Himalayas tower over the valleys and sneak up on the several layers of little pine ridges, when I could see the mountain rise from plains of the earth to reach for the sky and everything that’s in between, I knew was becoming privy to a beautiful secret! 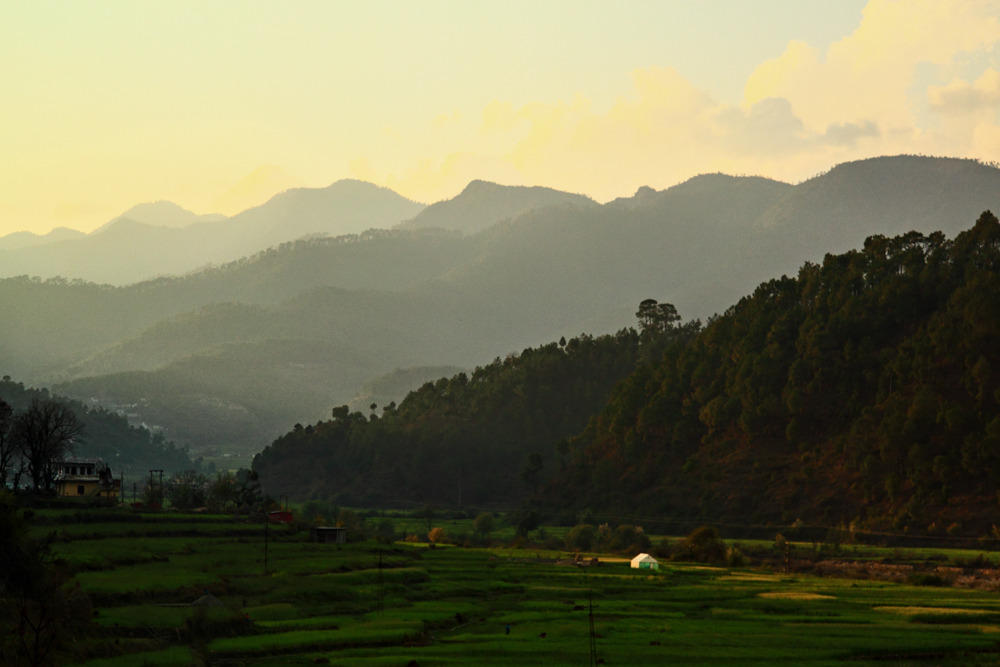 While I have been longing for mountains all along, there’s a certain charm to the mountain-surrounded valleys that you cannot deny. Wandering in the verdant Someshwar valley, on foot or on cycle, I often wondered how did I miss this little detail – that valleys is where life is. This is where smiles flourish, laughter resounds, people live and birds chirp. 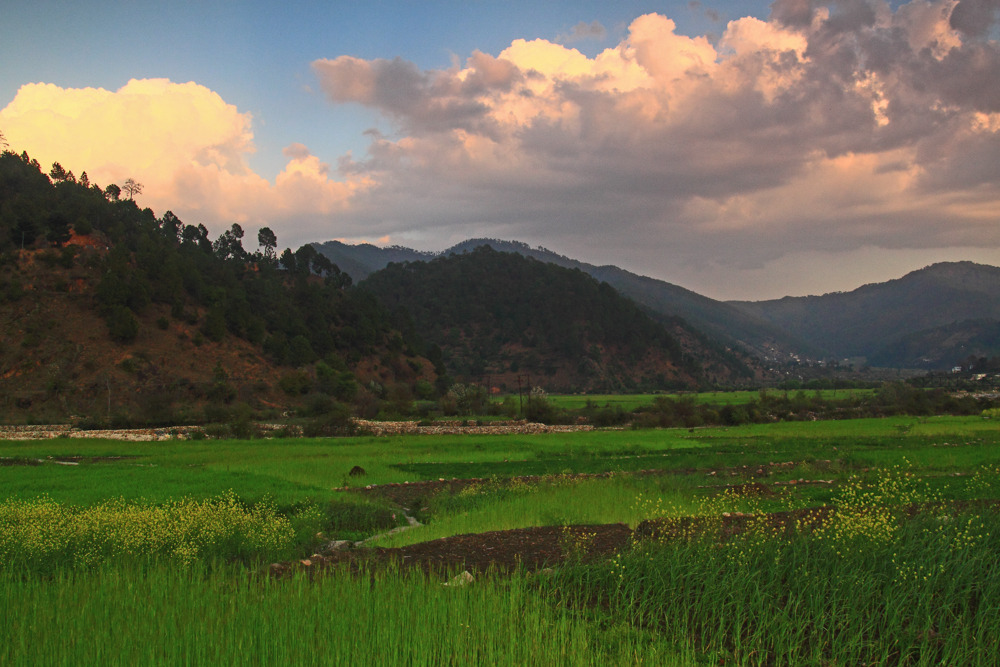 The thing with the hills is unless you are on top, your view is obstructed. The thing with the valleys is that the gorgeous views are unobstructed, despite being at the bottom! This is the typical landscape in the Someshwar Valley. 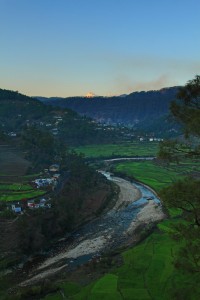 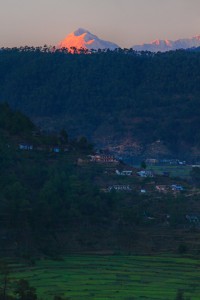 My tryst with hiking in the Himalayas had unexpectedly started in Gharwal, marvelling at the very same Trishul that was standing in front of me here in Kumaon. That was 6 years ago, yet looking at the crest of the mountain peaking above the Someshwar Valley, it felt like meeting a long lost friend when I hiked up the small hill in front of the retreat one evening. 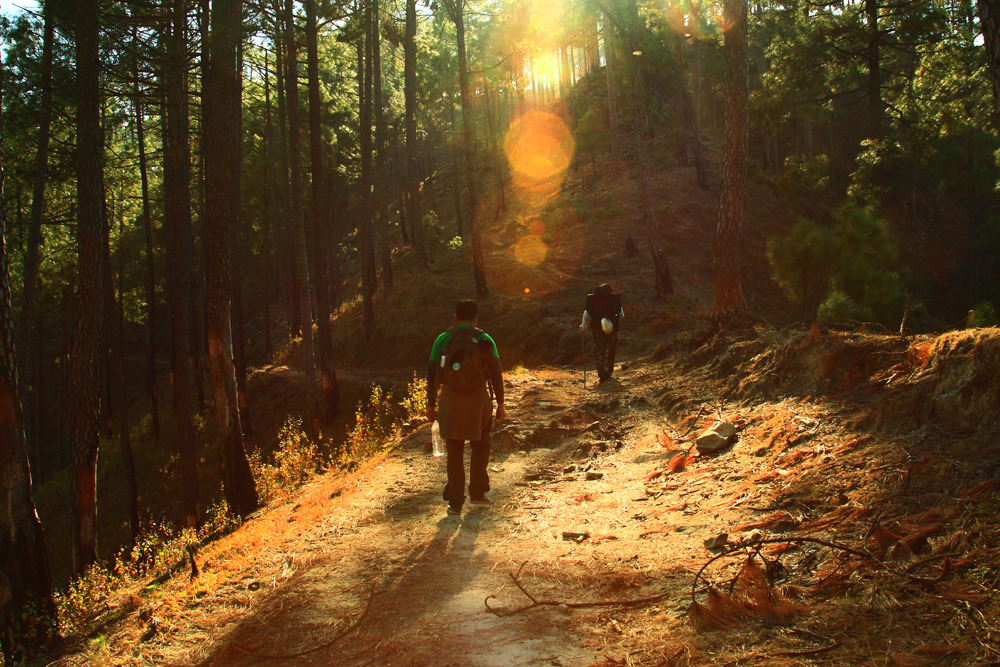 The inimitable romance of walking in pristine pine forest listening to the sound of rustling pine leaves that feels like swelling waves of an ocean and basking in the sunlight streaming through the punctured canopy is exactly the kind stuff that dreams are made of. For two days, hiking in the hills overlooking Someshwar Valley, I let myself fully immerse in the little joys of being in the outdoors. There were bigger rewards as well, but life is made up of many of such small moments too. 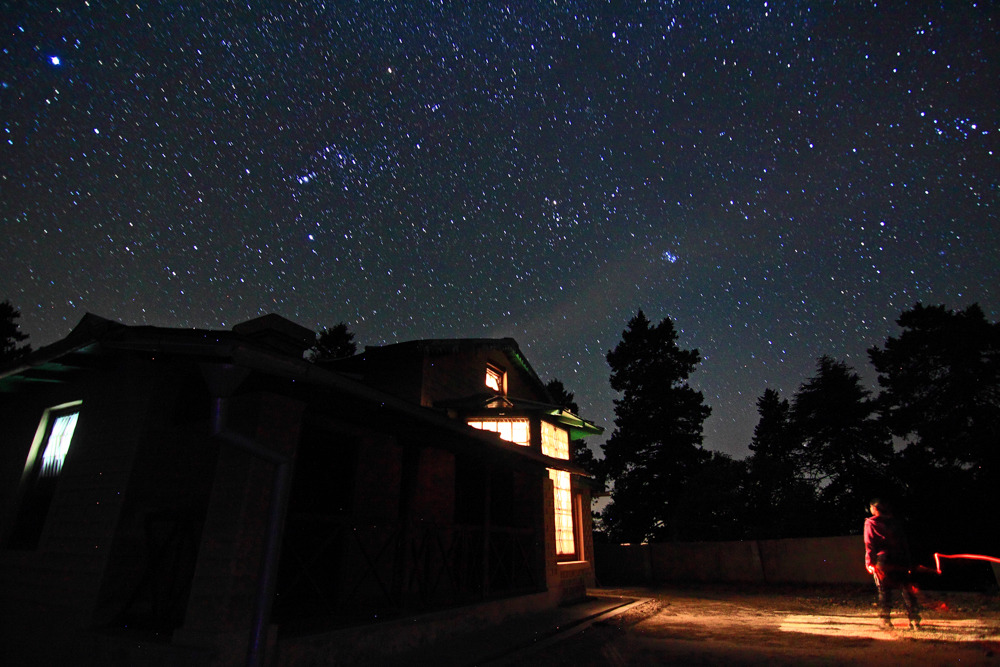 That night after a tiring climb through pine valleys and ridges, rhododendron filled pathways and countless Himalayan views, we came to a holy temple atop a hill. We spent the night at a forest resthouse. For the record, I was in a cottage. In reality, I was sleeping under the stars! 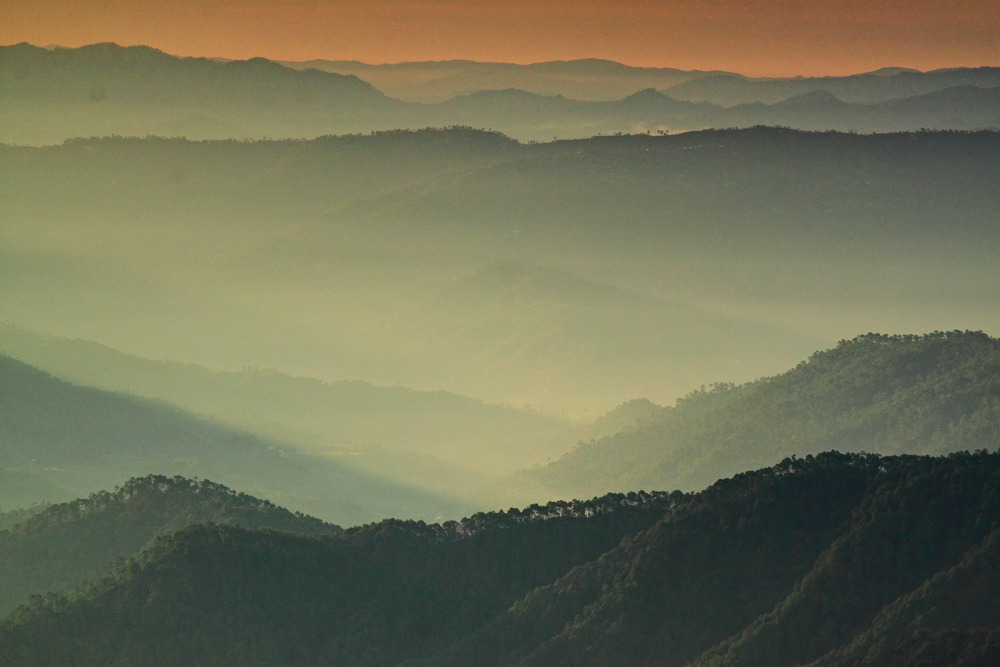 It was breathtaking alright but it was more heartwarming to see the mountains here without the deep gashes and ghastly bruises inflicted by humanity in the name of development. There is no greater joy than seeing undisturbed forests, even more so in a country like India where we are encroaching into every inch of wild spaces left! 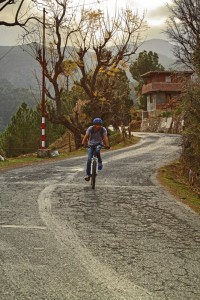 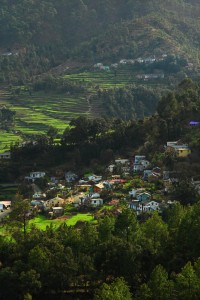 Some of you who were followers of this blog for few years now might remember that there was a time when I was crazy about cycling! I climbed 36 hair pins bends over mad gradients, rode 140kms in a single day, soaked myself silly cycling in the rains and even attempted to ride in the Himalayas. All that was behind me though, it’s been ages since I cycled and last year I even sold my trusted bike! But here in Someshwar Valley, couldn’t resist the temptation looking at the lovely roads of Almora and the mountain bikes at the place where I was staying. 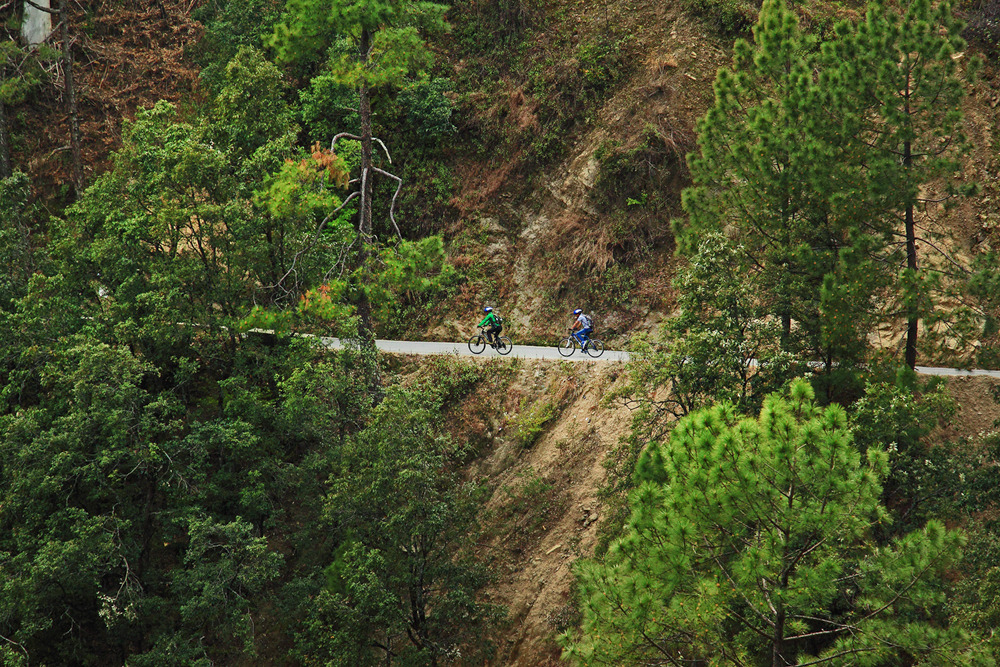 On the first evening, I took the bike out for a short spin – an easy 10km ride in the valley along side the fields. The itch had come back, few days later, we cycled all the way upto to Kausani, 20kms from the valley. The weather was delightfully overcast with cool winds to keep me company, the climb to Kausani was gradual and gently making the ride very pleasant. The cherry on top, however, were the breathtaking views of green valleys and pine mountains.

On the last day, before leaving the valley that gave me so many fond memories, thought it only made sense to hike up the hills one last time to bid goodbye. It rained that morning, heavily. As I made my way up the village into the pine forest over the ridge, this unbelievable sweeping view of the valley welcomed me. As the rain reduced to a drizzle, I stood over a slippery rock wondering if this was Kumaon’s way of saying farewell to me, by delighting me one last time. I walked further ahead on the trail lost in the view when two wild boars grunted and lunged into the forest startled by my presence, reminding me that the forests here as wild as they are beautiful. I scurried back in fear, to the retreat where I was staying. A smile stayed plastered on my face though, how wonderful was it to encounter life in the forests, abode of the wild, the beautiful, and the reckless! 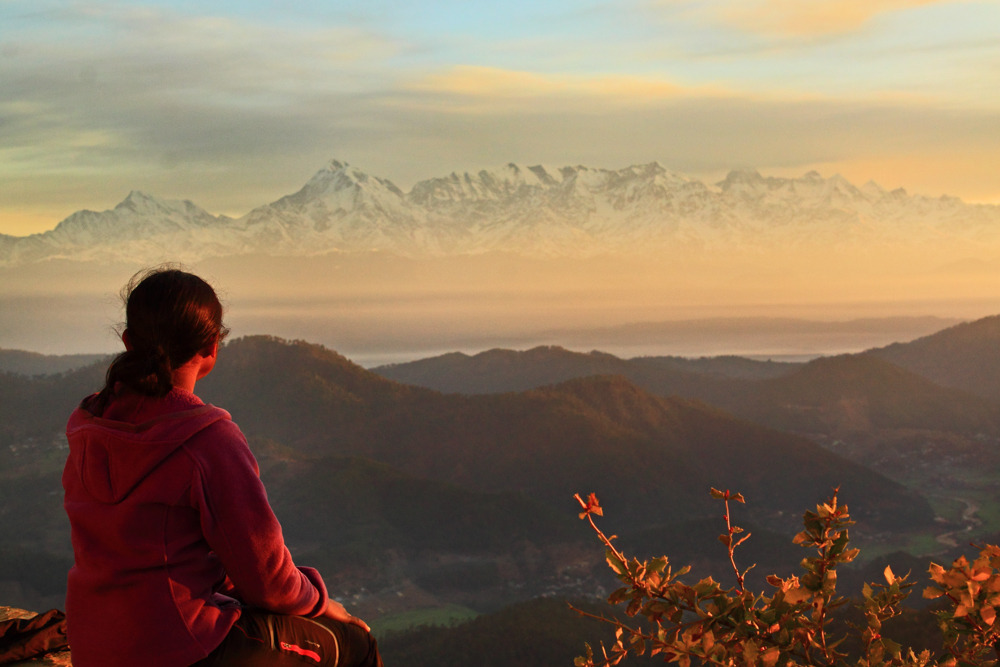 Sometimes, our greatest gifts come in strange packages. Who would’ve thought staying in valley will get me closer to the mountains? Who would’ve thought ignoring the hill station viewpoints will take me to secret hideouts only the locals know about? They say Uttarakhand is known as Devbhoomi, meaning a place where gods live, because of the numerous temples that dot the state. But looking at these mountains and valleys, I have no doubt that in that claim because who else can create a place so exquisite?

Someshwar Valley is situated between the popular hill stations Almora and Kausani in the state of Uttarakhand, India. The weather is pleasant during the summers and can get quite chilly during the monsoons and winters.

How to reach:
Kathgodam is the nearest railway station and Haldwani is the closest bus stop. From here, you can get shared or full taxis to take you to Almora, it takes about 4-5 hours to reach. The valley is at a distance of 20kms from Almora.

Where to stay:
Kosi Valley Retreat is a beautiful 4-bedroom stone building set in a quiet and serene Someshwar valley right on the banks of Kosi river, far far away from the crowd and tourists. The cozy retreat is managed by the sweetest team of locals from surrounding villages who will take care of you like family including stuffing you with lip-smacking homemade and organic food.

I travelled solo and never felt unsafe. Whenever I went hiking or cycling or walking, I was always accompanied by local guides from the retreat who took good care of me.

What to do:
Situated in a pristine corner of Uttarakhand, there are plenty of hiking and biking trails around the property. I went on 2 rides and 3 hikes during my week long stay there. Talk to the team at Walk to Himalayas who can suggest a good itinerary for you. If you love outdoors you are in for an absolute treat as the retreat is stocked with outdoor gear like rock climbing equipment, mountain bikes, camping gear and all that jazz.

Note: My stay and activities at Kosi Valley Retreat were sponsored by Walk to Himalayas. Opinions, as always, are honest and mine.

Neelima is a travel writer and a photographer. She has been travelling in India since 2008. She has travelled from the remote forests of Andaman and Chhattisgarh to the border areas of Nagaland and Kashmir. Her dream is to set her feet in all the states and Union territories of India by the time she turn’s 30.