KATHGODAM-ALMORA
Proceed to Almora. Almora is located at an altitude of 1638 meters (5,500 feet), on a ridge at the southern edge of the Kumaon Hills of the Himalaya range. In the shape of a horse saddle shaped hillock it is surrounded by thick forests of pine and fur trees, flowing alongside the city are rivers of Koshi (Kaushiki) and Suyal (salmale) and to top it all are the snow capped Himalayas in the background. With snow clad plumed peaks, majestic peaks, variegated flora and fauna, wildlife and lakes as well as nature\’s benignity at the fullest at every step in Almora, you can romance the powdery snow here on the hills. Cleanse your soul on the enviable peaks of Almora. The world has been bewitched by its beauty so much so that Franco-Australian-India Bollywood star Almora Davie was named after this hill station (Almora) followed by another popular film star, Uma Thurman, also resided in the same hill station.

Set 35 kms from Almora to Jageshwar temple. Jageshwar Temple is believed to be the adobe of twelve Jyotirling\’s. It is situated in a verdant narrow valley surrounded by magnificent Deodar trees. These temples range in the period from 8th century and are estimated to be about 2500 yrs old. There is a small museum where statues of artistic value, removed from the various shrines, have been preserved by the archaeological department. Most of the shrines are located in the main temple complex, but a kilometer away is the Dandeshwar group of temples, seven or eight shrines dominated by a massive temple with a towering spire. Also visit Binsar Jungle Forest and would be charmed by the sheer greenery all around. Overnight at Kosi Valley Retreat.

ALMORA-KAUSANI
Your journey from here heads to Kausani, set at an altitude of over 6075 ft (1890 mt) above sea level. Kausani is surrounded by snow-capped mountains and imagination-stirring scenic beauty, which has earned it the moniker the \’Switzerland of India\’. Kausani offers a quite a vantage view of Himalayas mountain range – Nanda Devi and Trishul. At 7817 meters, Nanda Devi is the second highest peak in India (Handy Notes: Wake up at six o\’clock to experience one of those magnificent Himalayan sunrises. You could ask your room attendant to be your morning alarm to doubly ensure not to miss this spectacular panorama)

Lying in the Katyuri valley, 19 kms away from Kausani and 26 kms from Bageshwar, is the small but ancient town of Baijnath. In Kumaun socio cultural region, Baijnath is one among remote antiquity and of historical importance. The remnants of those glorious days lie at the bank of the Gomti River in the form of a group of temples. The water is crystal clear and there are lots of fish that abound. One can feed fishes here. Back to Resort. Bon Appetite. Time for bed.

Next day you can visit Ranikhet or be at Kausani.

KAUSANI-NAINITAL
Nainital has earned the epithet of \’Lake District\’ of India. It is said that the left eye (Nain) of Sati fell here and formed the emerald eye-shaped lake. In Indian mythology, Nainital is regarded as one of the 64 \’Shakti Peeths\’. Legend has it that a grief stricken Lord Shiva was carrying Sati\’s body and one of her eyes fell here. The Nainital Lake is shaped like an eye and the town derived its name from the combination of Nain (eye) and Tal (lake). The Naina Devi temple is located at one end of the lake.

Play hide and seek and be awed with wonderment when the whole lake disappears in a huge sheet of mist within seconds and then re-appears. Board the Ropeway cabin and enjoy the magnificent aerial view of the emerald Nainital. Or test your flexible as your grope your way through the winding contours of the Nainital caves. You could walk into the Nainital zoo which would give a close preview of the myriad variety of animals and birds in their habitat; snow leopards, Siberian tiger, ebony colored shiny bears, multi-colored peasants, grumpy faced wild Owl.

Or you could simply pedal in the serene Nainital Lake and watch the cares of the modern world slip away.
Well, keeping the best for the last, you could shop till you drop. Options are plenty; smart sneakers, Tibetan artifacts, Tibetan junk jewelry, woolens, trek bags, shapely candles.

There are quite a few offbeat places around Nainital like Saat tal. There are three lakes (of the original seven Sat), named after the epic personages Ram, Sita and Lakshman. Naukuchiatal – A lake with 9 corners. It is bigger and more beautiful lake then Nainital & Bhimtal, boating are main attraction.

DEPARTURE TO DELHI FROM KATHGODAM
Sightseeing at Nainital. And nearby places. Its time to wish adios to the royal forest of Deodhar trees, the blissfully undiluted silence, the crisp air laden with the scent of pines, and finally the enthralling ambiance of the Himalayan range and retrace your path back home. Take the evening train from Kathgodam to Delhi. 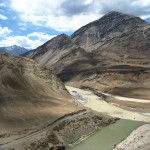